I don’t think I need to explain why.

Well, cya in 3 hours, which is when 2017 officially begins here on the East Coast! I know this was a lame post to end out the year, but trust me, the first post of 2017 is gonna be awesome, just you wait and see…

So the Creators just posted this! http://blog.poptropica.com/2016/12/mypoptropicacostume-contest-deadline.html?m=1

I mean, it’s great that they are giving us a couple extra days to enter the contest, but here’s the thing…

We aren’t getting New Pop news this week. Those costume contest updates were the “big news.”

I don’t get why Skinny Moon can’t just admit it’s not coming out this year, was the whole reason behind the costume contest just to make us forget about how New Pop was supposed to release later in 2016?

I’m sorry I’m just really upset right now. I’m sorry that I got your hopes up.

I made my first ever comment on the PHB; on the Avatar Studio Gift page. Although that comment was lost in a flood of hundreds and maybe even a thousand more, I still remember what it said.

That comment on the December 29th of 2015 would lead to many more comments on the PHB, and then comments on other blogs, and then a blog of my own. And here I am today, one year later.

2016 is finally coming to a close, Poptropicans. So, so much has happened during this totally crazy year…but what will happen next year? What will happen in 2017?

END_OF_DOCUMENT_TOKEN_TO_BE_REPLACED

So a couple hours ago the Creators posted this, and I suggest you read the entire post before continuing: http://blog.poptropica.com/2016/12/big-news-about-mypoptropicacostume.html?m=1

I show the full link for style, don’t question my quirks!

To make this as short and simple as possible, the Creators are so impressed by the costume contest entires that there are going to be two winners and not just one. The Creators will also pick 20 other costumes, and we get to vote from them to chose the 10 runner-ups. Now that’s just cool. The contest will still end on New Years, so be sure to enter soon, time is running out. Voting will happen in January sometime, and the winners will be announced later during the same month. And if you win, you’ll not only get membership, but your costume will be available to purchase in the Pop Store and an NPC on Home Island will wear it. That’s also cool.

So yeah, that’s the “big news” we got. I mean, it still is big, don’t get me wrong, but I got my hopes up too high; I thought it would be New Pop stuff. Don’t fear though, because one plural word comes to the rescue! Look at this comment Skinny Moon made on the PHB… 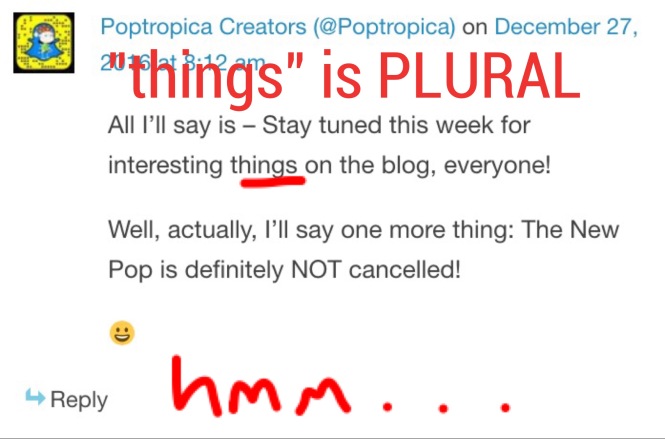 Not only does she seem to be hiding something obviously related to New Pop, but as you see above, “THINGS” IS PLURAL. That means more news could be announced tomorrow or Friday. I personally feel like it will be tomorrow, since the Creators love to announce huge things on Thursdays, but Friday is possible too. Just stay tuned!

I would just end this post there, but upon rereading the costume contest update post a couple times, I noticed some small, yet important details. Heck, we may have even learned some info on New Pop! Let me explain…

Actually, that’s all the evidence I have at the moment. That being said, that’s the end of this post. And just like today, two posts will be published tomorrow! See ya then.

Below are my guesses of how old some Pop characters (mainly villains) are. I randomly decided to make this post at like 11 PM last night, so yeah, the quality isn’t the best. Anyways, here’s the list!

TC’s Age Guesses (in years; may or may not be accurate)

Your Poptropican: 6 to 15 age range, older in many cases

Booted Bandit: same age as your Poptropican (if they really are twins like I theorize)

Sir Rebral (however you spell it): late 20s

Andddddd that’s all I can think of right now. Leave any character suggestions in the comments; I may just do a Part 2 soon. Cya!

I know it’s a little late, but here ya go!

TC the Snowman, was a jolly blogging soul, with red glasses and bright blue hair, and two eyes that so weren’t coal!

TC the Snowman, is not really a snowman, they say. Just a Poptropican wearing a costume, that she put together one day.

There must not have been some magic in that red elf hat she found, for when she placed it on her head, nothing happened at all!

Oh, TC the Snowman, was alive as she could be; she has a pulse and keeps breathing, just the same as you and me.

TC the Snowman, knew she had a post planned for that day, so she rushed online and began typing, before the day would go away.

Back onto Discord, with her headphones on her ears, talking here and there, all around servers, sayin’, “Today’s new post is here!”

She went right to the PHC, on time for the holiday party; and only paused a moment, when some spammers went cray cray!

But TC the Snowman, had to hurry on her way. She changed back to her normal outfit, the snowman will be back some day! 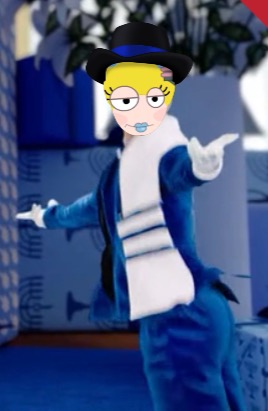 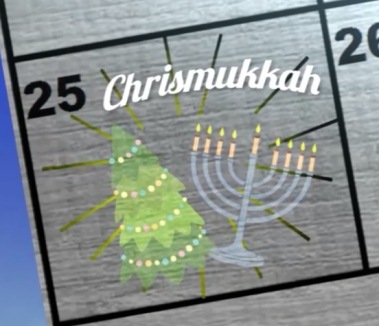 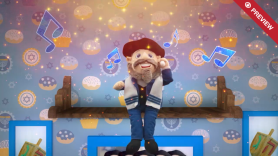 I hope you have an amazing Christmas and/or Hanukkah, I’ll cya soon!

I know, I know. It’s Saturday, not Sunday. But I just felt like posting the finale to the Holiday Special today, I don’t know why. Well, enjoy!

After nearly a month of Robutt troubles, the holidays are finally here. It’s Christmas Eve today! And the first night of Hanukkah! Chrismukkah! Presents!  A new phone, hopefully!

And since Robert was defeated, I would no longer have to worry. I could finally enjoy my favorite time of the year, in peace.

We went to my grandparents’ house for the day, which was pretty fun, and nothing too bad happened. By the time we got home, it was getting dark outside, and before I knew it, it was time to go to bed.

I wasn’t very tired though. You see, I’m a night owl who stays up past midnight whenever I don’t have school the next day, and not just on New Years!

So I decided to sneak downstairs to see if the presents were under the tree. And I just so happened to see a shadow of a man with a big sack…

“Is that…Santa Claus?!” I whispered to myself.

“Ho ho ho!” Santa laughed. But the laughter soon turned into weird robot sounds, and I was suddenly in the presence of a familiar figure. Robert.

“But I thought you…”

He started destroying all the presents with his lasers, the whole house burst into flames…

And that’s when I woke up from the dream. Yes, that was all a dream. I quickly pulled out my phone, which thankfully wasn’t ever blown up, and the date said…October 30th?!

“I’m never having a Discord party with Robutts AGAIN.”

First things first, there won’t be Popular Opinions today. Or this week. And it’s not because of tonight’s PHB holiday party or me being lazy or anything like that. My reasoning is very different than usual.

You see, the Creators finally posted on their blog tonight, talking about their holiday break and stuff. But a paragraph towards the end of the post is hinting at something huge…

We’re getting New Pop info next week, period. That just has to be it!

However, I don’t think the actual game is releasing quite yet. Instead I feel like they will post some more sneak peaks, maybe even a trailer. I also wouldn’t be surprised if they admit that the New Pop is in fact delayed. If they do make that official, along with giving us an updated release date, I’d really appreciate that.

Guess we’ll just have to wait and see. It could be as soon as Monday the 26th, or as late as Friday the 30th or even New Years. Whenever the Creators drop the New Pop bomb though, I’ll definitely post about it right here on TCPB.

UPDATE: I just noticed something… 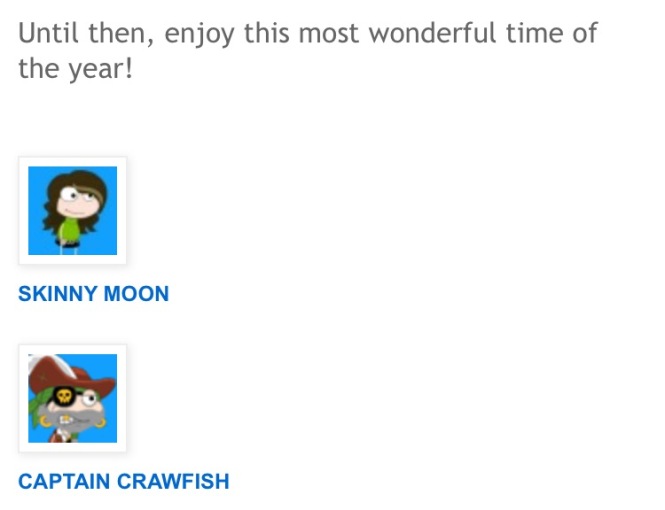 They both wrote the post?! More proof that the info we’re gonna get next week is gonna be major. Or all the Creators want to get us in the holiday spirit, but Skinny Moon and  Captain Crawfish are the only ones who actually blog. Either way, this has never happened before.

The USUM hype is real.